WENHAM MUSEUM: Accredited by the American Association of Museums in 1973

The mission of the Wenham Museum is to protect, preserve and interpret the artifacts of childhood, domestic life, and the history and culture of Boston’s North Shore. 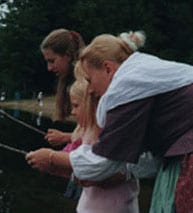 In 1921, the Claflin-Gerrish-Richards House was purchased by the philanthropic Wenham Village Improvement Society for the purpose of preservation and exhibition. Then Elizabeth Richards Horton, a former resident of the house, donated her International Doll Collection to the WVIS in 1922, marking the beginning of the Wenham Museum as we know it today.

The museum was incorporated as a separate entity in 1952, and Adeline P. Cole presided as President over the grand opening in 1953, when the Pickering Library and Burnham Hall meeting room were added. The Wenham Museum was first accredited by the American Association of Museums in 1973 and underwent a major renovation and expansion from June 1996 to August 1997.

In 2013, the museum celebrated its 90th anniversary with a Birthday Gala.

Meet the Board of Trustees and the Staff of the Wenham Museum.

Interested in hosting an event at the museum? Learn more.

A special interactive space for young museum visitors with changing hands-on activities for creative learning. A period playhouse, general store, variety of blocks, doll house, musical instruments and more help history come to life for children of all ages. Hands on exploration is a fundamental concept at Wenham Museum. This gallery has been designed to introduce our youngest visitors to museum concepts in a fun interactive setting. See what’s on exhibit in the gallery now.

Read what people are saying about the Wenham Museum